Glimpses of Daily Life in Gaza 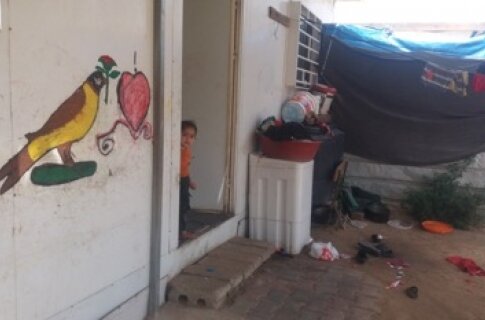 Niveen and Her Children: Life in Tinplate Caravan after the Scourge of War
Sep 18 2016

She was destined to start her life in a world of poverty, misery and despair. In her little self, there are repercussions she might not be able to forget with the years. Three-year-old, Nurhan Al-Shunbari, has a life not so different from any member of her family. And despite her young age, she is prepared as any of them to face a battle of existence, since she opened her eyes to find herself living between the tinplate walls of a caravan. 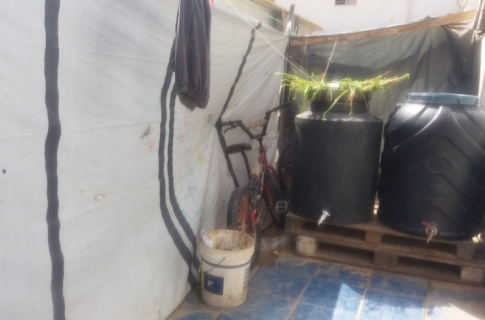 “Oh God, as you have saved Prophet Ibrahim from fire, save us from the fire of this caravan. Oh God, as you have saved Prophet Younis from the belly of the whale, rescue us from the stomach of this hot tin box“, prays Mahdhiyya Al-Athamnah, (30), as she also describes life inside the caravan, especially with the rise in temperatures and the delayed reconstruction of the Gaza Strip, two years after the family home was destroyed due the Israeli war on Gaza in 2014.

Yusra’s Shattered Hope of Leaving the Caravan: The Inability to Prove Ownership of a Destroyed Home
Aug 02 2016

She holds a piece of cardboard, waving with it near her face to get a bit of a breeze, for the surrounding air only makes the heat more intolerable, like hot wind passing through fire only to flare up its flames.

Yusra Basheer, a woman in her twenties, is one of the people living in caravans, the temporary, box-like accommodations in northern Gaza Strip. She moved there with her husband and two children, but only by force. She hopes that her house in Al-Amal (Hope) neighborhood in Beit Hanoun will be rebuilt. Like thousands of Gazans, their house was... Read More

Khuza’a – Fatima (4 years old) was not fully aware of what exactly had transpired with her family on that exceptionally scorching hot July summer night. She did not know why her family who lives in Khuza’a Village all the sudden had to move from their second floor flat, into to her grandfather’s first floor flat, but she did however sense that it was not for a happy reason.

Khuza'a, Gaza Strip- "Um-Fat'hi" put her little one in the baby cot and took her outside to catch some sunshine, as the inside of their temporary shelter (wooden caravan) never sees any sun. The caravan stood right next to their home in Khuza'a, east of Khan Younus. The house was completely destroyed by Israel during the 2014 aggression on the Gaza Strip.

You reach the site of the caravans with great difficulty, after your feet sink in huge mud puddles caused by the heavy rains. Once... Read More

Shujaeyya, Gaza- The car drew closer to our destination; its wheels rolling slowly on the muddy unpaved road. The driver suddenly stops and points towards what is supposed to be our end destination. We found ourselves before a fence made of corrugated tin sheets, which in order to reach you need to walk through a huge puddle of mud. Here lives the Habeeb family alongside the eastern limits of Shujaeyya neighborhood at the east end of the city of Gaza; the streets on which they were tossed ruthlessly as a result of the 2014 war after the Israeli... Read More

Rafah, Gaza Strip- Despite all the calamities that hit them during the recent war on Gaza, Muhammad and his father pushed through. Their journey to keep Muhammad in college is one where the first steps were simply the challenge to survive. Muhamamd al Ghoti (21) is one of the many people whose homes were totally destroyed in the recent war. With the bitter taste of grief in his mouth, but with a pinch of hope, Muhammad tried to remember what happened to them. “Gaza was fully destroyed under the watch of the whole world; only small pieces were spared,” he said... Read More

Al Shate’ Refugee Camp, Gaza Strip- It took fifty-seven-year-old Kamal Al Habil, also known as Abu Iyad, twenty-five years of hard work in construction to be able to build his own home. He built it stone by stone, memorized every inch of it, and could even tell an interested passerby how many iron bars were used in the foundations and columns. The most excruciating moment of his life was the moment he saw that house tumble down after being hit with two missiles from an Israeli F16 fighter jet without any warning. In the last days of Ramadan, on the 22nd of July,... Read More

Khan Younis, Gaza Strip- “I am searching through the rubble, looking for anything that might still have some green in it to bring it back to life.” This is how thirty-three-year-old Rami El Breem describes his hopes while he stands over the rubble of his destroyed nursery. His nursery, in the Zanneh district east of Khan Younis, housed more than 5,000 different saplings and plants. He had trees like figs and olives, he had vines and lemons, and he had roses and jasmines among many others, including his beloved cactuses.“We left our home under heavy... Read More

Al Shuja’iyah, Gaza Strip- “I was super happy when our temporary home was built,” 19-year-old Riham al Arqan said as she spoke about what she described as a “hut.” Her father, Jihad, built it brick by brick alongside their old home, which was destroyed in the war like the rest of the houses on al-Mansura Street, east of Al Shuja’iyah. It took him a whole month to build this small house of two bedrooms, a kitchen, and two bathrooms. They moved in a week ago, as they could no longer bear to burden their relatives, who had been very kind to... Read More